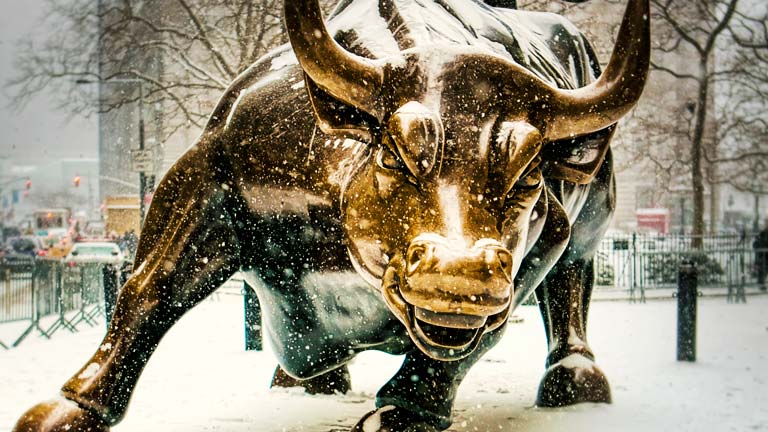 … I feel like I would be remiss if I didn’t point out to every one of our readers that Uranus (the planetary ruler of revolution, mass disruption, and the internet) will enter Taurus (the sign of value and wealth) this May.

Uranus will retrograde back into Aries in August, but then it will go back into Taurus in January 2019 and stay in Taurus until 2026.

Why is that important?

Astrological events represent synchronous movements in the collective (un)consciousness, and nothing is quite so collective as currency.

Astrological magic has everything to do with the art of timing – and so does profiting from markets, so it looks to me like there’s room for much magic here.

The last time Uranus entered Taurus was in 1934, right around the time that President Roosevelt disconnected the U.S. dollar from the gold standard – and soon after currencies and markets around the world underwent intense fluctuation connected to World War II.

Astrologer Jessica Adams does a great job of explaining all this in her essay on Uranus into Taurus right here.

You may not realize this since it’s not often talked about in contemporary media: but the currency that most of the world runs on right now is fiat currency, created at will by governments – a prime example is the U.S. dollar — and all currencies are only as strong as people’s belief in them.

(I find this fascinating: since they’re based on pure belief, currencies are highly magical and mercurial. In fact a strong argument could be made that the invention of a regulated currency system in Babylon in 1760 BCE was the founding act of magic that created our modern civilization.)

All this means that currencies, even the famous U.S. greenback, are a lot more fluid and vulnerable than is generally grokked. For example, throughout the 19th century (less than 200 years ago, a finger’s snap of history) multiple local currencies proliferated in the U.S.

My sense is that this May could herald a time when there’s a major crisis (Uranus) of faith in the representation of wealth (Taurus) by fiat currency.

What to do about this?

I’m no financial advisor (I’m a witch on the internet, obvs) so definitely do all your own research and come to all your own conclusions- but I’ll go ahead and let you know: my hunch is that it’s a good idea for everyone to invest at least a little bit (what you can afford to lose) into cryptocurrency about now.

Uranus does represent crisis – but crisis is also opportunity.

You may feel like you “missed the boat” with the big Bitcoin boom that happened this December – but friends of mine immersed in the blockchain world assure me that the boat is yet to leave the harbor, actually.

The proverbial boat might fully set sail in May when Uranus first enters Taurus, or in January 2019 when Uranus is done with its retrograde into Aries and heads back into Taurus for keeps until 2026 – but either way, right now it’s still there to be boarded.

The total market capitalization of the cryptocurrency market (which you can keep tabs on at coinmarketcap.com) grew exponentially in 2017 and there’s no reason to think it won’t continue to grow exponentially as blockchain technology advances and as more people around the world come to understand it and invest in it.

As to exactly “which cryptocurrency” to invest in – well, Bitcoin and Etherum are the most stable of the bunch right now, but there’s a long list of evolving cryptocurrencies to choose from, some which may yet sky-rocket in value – sites like Investopedia can educate you on the topic and Coin Telegraph can fill you in on the latest news.

The simplest site I’ve found for purchasing cryptocurrency is Coinbase – the “main” currencies purchased at Coinbase can then be transferred to exchange sites like Binance to purchase lesser known cryptocurrencies.

I may say more about all this later, but I figured I should send out a “heads up” and now you have it.

How to Design Your Logo as a Powerful Magical Spell

How to Choose a Patron Deity

WITCH exists to nourish magic in the world through shadow integration and shamelessness done with an awareness of "as within, so without - as above, so below." To write for us and reach an audience of thousands, please send submissions to assistant editor Karolina Boldt at badwitcheseditor@gmail.com.