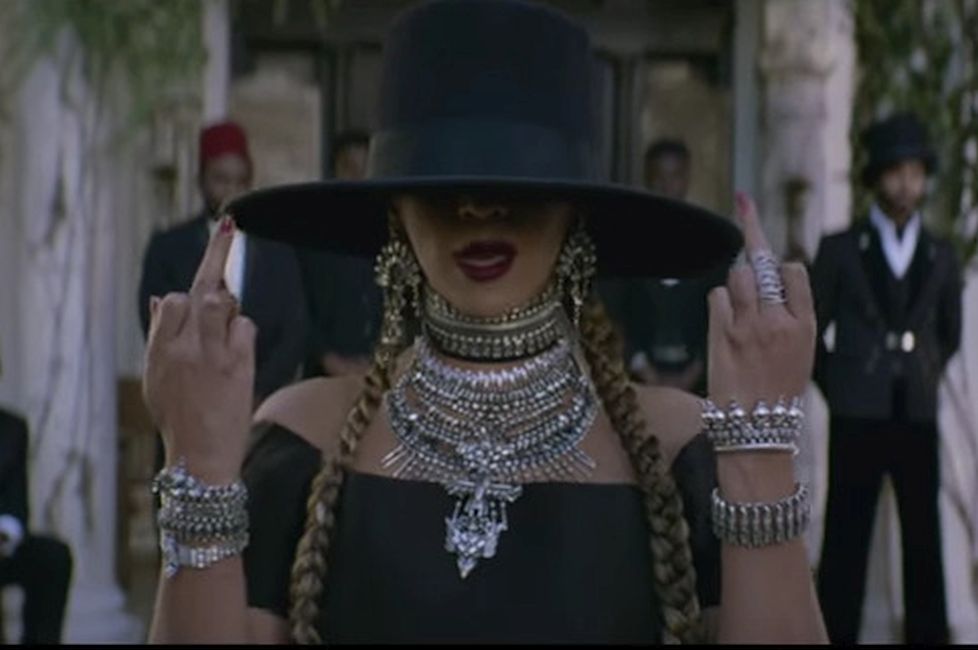 “I did not come here to play wit’ you hoes! I came to SLAY bitch. I like cornbread and collard greens, bitch…”

Beyonce’s new song “FORMATION” has set a raging bush fire all over the wilds of Onlineland-oh. Her performance at the Superbowl (expertly timed for the Black Panther’s 50th anniversary) had folks terrified and jubilant in equal measure.

Some say it’s a cunning marketing move, some say she is fixing to spark riots and “race rows” (wtf does that mean??) some say, it’s just entertainment and to leave it at that.

However us witches know that there is much more to it than all that. Something deeper and darker, something bitter and troubling to the palate yet something, ultimately nourishing.

A scary yet sexy and witchy swamp thing…

If you haven’t already seen the official video (or if you are fed up of sifting through the dumb “reaction” videos to look for the real deal) here it is in all its fierceness:

FORMATION has got me writhing around like a hot sticky panther for SO SO many reasons. The lyrics make me feel like a bossed up urban lioness with raw cacao pumping through my main veins.

The beat is just salacious and sick, taking me back to that stank, dirty south hip-hop I used to hear squeezing through the cracks of my brothers (locked) bedroom door while he pumped his latest girlfriend to filth.

And the dance moves? Witch please?!

I cannot remember the last time a pop song gave me such primordial, clit throbbing feelings.

I’m an underground girl, I like late night radio and low key artists.

It was a Coven Activation par excellence. 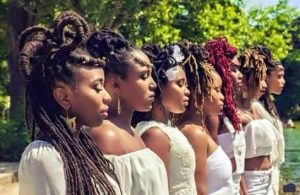 Beyonce is calling on witches worldwide to get in FORMATION & information and use their sorcery to change their worlds, have fun, get fucked (good) and make some serious cash money while doing it (“your best revenge is your paper”) and screw anyone who has anything to utter your way about said activities.

One could say that this is somewhat of a commom theme in Beyonce’s generous body of work, nothing new here bitch. Indeed, Ms Sasha Fierce has carved a niche for herelf us the go to gal for tunes to stoke up the inner feminine fires. However, with this song things get kind of spooky, super intense, and deliciously wicked:

In this song she is speaking directly to her fellow Black Witches and she gives no fucks about what anyone thinks about that fact and neither should she.

Of course the song can be enjoyed by anyone and everyone on a multitude of levels but there is level that speaks directly to the heart of the African Witch who is willing to hear and from what I am peeping on social media sites and behind closed doors at the beauty parlour many of us have heard the call. 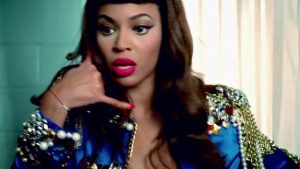 Beyonce has been in the industry a very looooong time.

She has played the game through and through. Headlined stadiums, snatched a few trophies, stood on red carpets grinning and cheesing with Bono, modelled for Tommy Hilfiger, but she still lives in an America that shoots down melanated people like skittles.

You only have to look at the way Tennis legend Serena Williams is treated. She should be a national treasure but alas… Not in America. Not right yet. 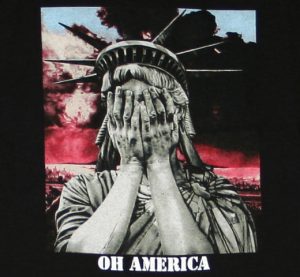 It is clear to me that Beyonce came from the Motown school of music biz training which has as it’s ethos “Sing nice, be sweet and give the white folks what they want and they will love and accept us.”

Only thing is it does not really work. When I look at Bey in the video I see someone who is sick and tired of telling people what they want to hear to feel comfortable.

Someone weary of conforming and respectability politics. I see a woman, a mother who is God damn tired of hiding parts of herself to appease the masses and this a weight that all black women carry that is so heavy it cuts grooves into the flesh. 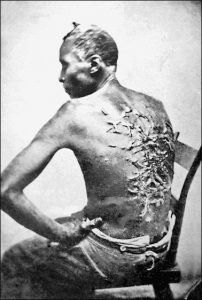 However witches. Do not despair. There is good news.

For the wellbeing of us all, a new era is dawning and it is one where women, white and black are owning who they are in all their grim and glory and celebrating themselves.

We are no longer diluting our magic or selling ourselves cheap just to uphold some tired narratives of victimhood that we co-opted into not knowing what they would cost us.

We are no longer playing “Aunt Jemima” and kowtowing to others just to make them feel better about themselves.

FORMATION is a bush telegram of epic proportions. A coven activation straight from the African jungle via Louisiana.

It is a public display of witchery and shadow intergration served down-home Southern style.

The video is laced with so many covert and overt references to occult African culture, New Orleans Hoodoo, The Enslavement, The Moors, Dirty south Bounce music (yass Big Freedia!!) that it would take several articles to break it all down, especially for those whose passing knowledge of “Black History” begins with the American enslavement (naughty naughty…)

To the ardently curious however, googling with discernment will be your best bedfellow.

However, those who don’t wish to fill their overloaded minds with even more information are invited to try this little excercise:

Close your eyes. Hear the music. Feel it in your cells and DANCE.

Get into your bodies. Shake your hips, get the blood rushing around your womb and remember… tap into those ancestral memories and you will know. Shake your ass, dip those hips, twerk it and access that MAGIC.

To those of you who would need loving assistance to learn how to do this I will happily be of service to you in my new online course about the YIN SECRETS of MELANIN MAGIC, Coming soon… 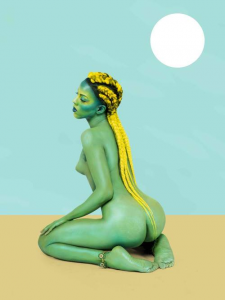 But until then just get on Youtube and rinse the song til it gets a billion views, which I may just end up doing singlehandedly!

One could say that I am a consummate show off. I love to get into my body, shake the house down and waken the dead and with this new song Bey has given me some great new moves to learn and some killer lines to quote too!

A fellow witch and I were chatting on facebook, excited and in a frenzy, trading off our favourite lyrics from the song.

She loves the “best revenge is your paper” line which I dig, too. The internet is all acrawl with the red Lobster reference of course. However, goofy as it may sound, my favourite line is this one:

Just look at Queen Bey all prim and proper, house negro style, about to lunch with the ladies, and a bottle of hot sauce in her bag!

When I heard her sing the Hot Sauce line I almost came in my knickers. Why you may ask? Well, I will tell you.

A lot of white folk may not know this but us black folk we like our food to be flavoursome and well seasoned. When you’re eating at home or at aunt Mae’s or whatever, it’s cool, you know you’re safe.

But, as with all people, we do like to explore new places….Thanks to that line black people everywhere may now openly admit that they have a little bottle of their favourite hot sauce stashed in their purse to season the bland food they must encounter whenever they leave home or when they get invited to be the token at Christina’s tea party.

If they don’t have it, it’s coz they forgot it. Next we will be eating watermelon outdoors with ease. Hallelujah. Now that, my friends, is shadow intergration. That is liberation. That is witchcraft. 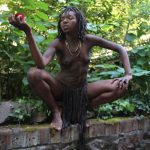 Vedina Mosê is a mother, musician and mischief maker. Currently working on a follow up to her haunting debut album “The Soul Remembers Everything” and unschooling her two magical daughters, she also teaches Ancestral Dance and will be running an online course teaching white girls how to get out of their minds and into their bodies and tap into their inner black girl magic.
Born in Dar Es Salaam and raised in London, she is currently traveling around Europe in her bodacious purple van.
To join the mailing list for her courses slip an email to: Vedinamose@gmail.com
To find out more, connect with her on her website www.vedinamose.com, Facebook, Instagram and Twitter and on her (sorta neglected) blog. 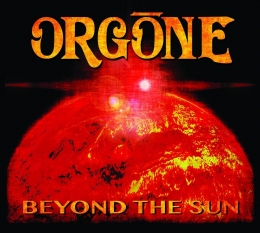 ORGONE “BEYOND THE SUN”: THE UNIVERSALITY OF SOUL (MUSIC)

by Zoe Kosovic-Rios Orgone: California Soul is Here to Stay To be timeless is ... 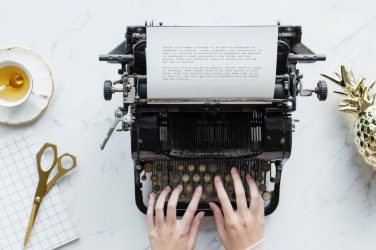 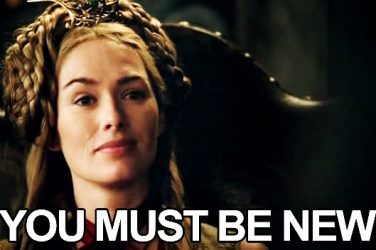 1. You super-love your best friend, except for those fleeting moments when you…. don’t. ...

Carolyn Elliott July 9, 2015
2 comments 0 Shares
WITCH exists to nourish magic in the world through shadow integration and shamelessness done with an awareness of "as within, so without - as above, so below." To write for us and reach an audience of thousands, please send submissions to assistant editor Karolina Boldt at badwitcheseditor@gmail.com.