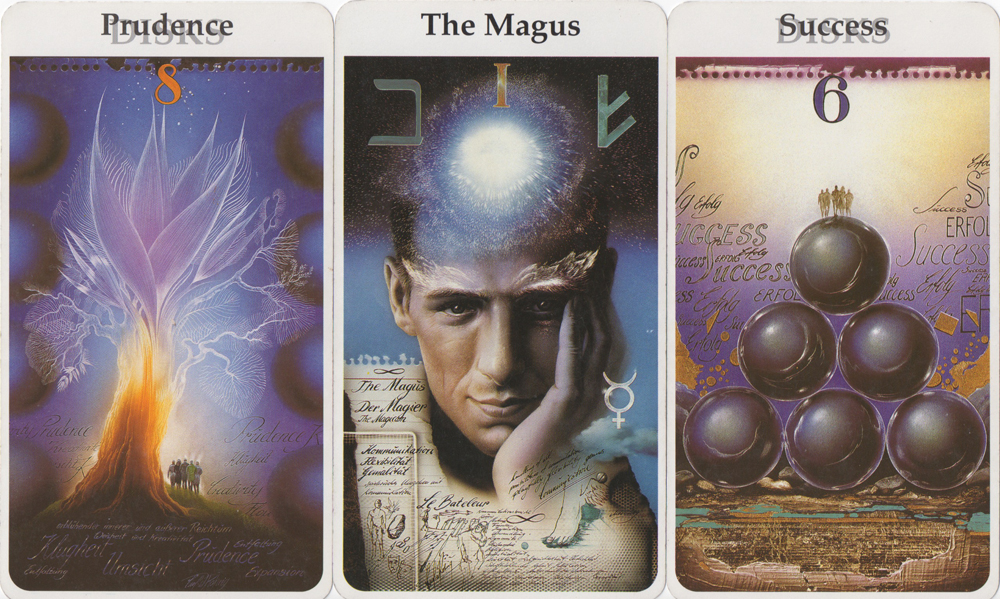 Ahhhhh! I just love how these colours and images work together. There is such balance!

The fragility of the skeletal fronds of the yet-to-be-fleshed leaves and petals on the surreally sublime tree in the Eight of Disks — and that same fragility in the feathered light rays, like starbursts, over the crown of The Magus.

The two sets of five figures in the Eight and the Six of Disks, and the contrast of their locations in each.

The flipping of the colours from the Eight to the Six: burnt-orange ascending to violet in the first, violet ascending to burnt-orange in the second.The two sets of five figures in the Eight and the Six of Disks, and the contrast of their locations in each.

A light source masked from us in the Eight, then revealed to us in the Six (though not for the five figures who, from their perspective, never lose sight of it).

And the timings! I forgot about those for a moment. I don’t usually deal with timings in this column — the Soul has its own time, and it may well dance to its own schedule here, too. But there is also something worth noting about those light sources, and you as the magical figure at the centre of the reading.

The Magus, who, unlike the five figures in the other two cards, is up-close-and-very-personal.

And he’s looking at you, kid. What’s he saying to and through you, I wonder?

You, Mr Magus or Ms Magicienne, are hubble-bubbling something up in that cauldron of yours and it looks pretty darn fine from this perspective — that is, if you’re looking to create something that is both collaborative and has the ability to support everyone involved.

Let’s see how this all weaves together. Because it feels simple, but asks for precision. Mercurial precision.

The Magus is Mercury. Communication, mental agility, the ability to move between the underworld (or the unconscious, perhaps) and the world of the living (the conscious), commerce. Mercury is quicksilver — shapeshifter; sometimes trickster.

His mind is so sharp that it is able to forge reality, working as he does in the tarot with all four suits, or levels of creation: Wands (Eros/energy), Cups (emotions), Swords (thought), and Disks (matter). (You can find out more about the four tarot suits here.) 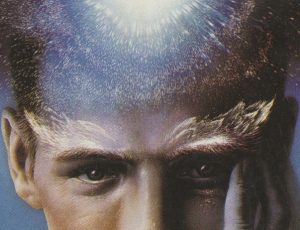 Making something matter. And not just to you, but to others too.

The Magus is the archetype who is calling something forth in you, is calling you into an act of creation.

So what is it that you’re creating? What project are you focussing on bringing into form?

Are you even aware that you are bringing something into form?

Note how powerful the mind is. Observe how phenomenal it can be when it is devoted to a cause, and intent on bringing it through. Observe how a cause can be one you are aware of as something that serves you.

Or how it can be something that no longer serves you at all.

Or how it can be something you’re not aware of because you’re looking the other way and not fully engaging with that creative aspect of yourself.

That’s when the trickster archetype comes in: creating something when the creator’s awareness is not fully tuned in, when s/he is absent.

The mind without grounding, focus, and humility is like Mickey Mouse in The Sorcerer’s Apprentice without the guidance of the adept.

What ensues is the chaos of recalcitrant thought forms that run rampant without true leadership and create a sense of overwhelm.

Sometimes overwhelm is what we need to experience when we believe we are in full control.

By losing control, we find where the real power lies, where and how it becomes available to us, and how we can call that inner adept in us forth.

And it looks like that adept is waiting for you:

Here, in this reading, there seems to be the high potential for the kind of order that not only gets things done, but works harmoniously with both the energy that is waiting to be expressed, and those who can assist you in bringing it through.

The Magus is present in you. You are embodying The Magus.

You are creating something, and there is a timeline to that creativity this week.

On September 1, there is an annular solar eclipse, where the Sun is partially obscured. This is suggested by the light source in the Eight of Disks, that shines through something organic, creeping out around its edges.

Between now and then, you are nurturing something into existence.

It is active as you feed, water, imagine it to life. You have a plan that you are beginning to implement.

Go slow and careful through this next period defined by The Magus, as Mercury heads into retrograde almost the same time as this first eclipse (on August 30, two days before).

Tend to it, tend to it. No need to rush.

You’ve breathed life into it, now protect it as it does what it needs to do to get where it must go.

Then, around the time of the penumbral lunar eclipse on September 16, you start to see what is taking shape. 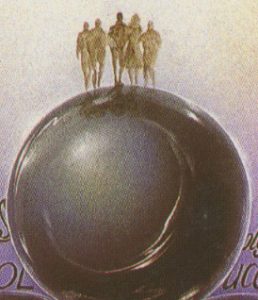 This is the final card, the Six of Disks. Your project becomes more defined; you gain a new perspective. On some level, there is Success — though that will be defined in as many ways as there are projects, and not all projects will be what you will consider traditional projects.

Whatever it is, it can form a foundation, and it can hold you — if you, too, can hold to yourself, your ideas, your collaborations, your vision, and the steadiness that comes from working with what moves through you, rather than forcing the flow to an agenda that is perhaps smaller than the one that is really at play. 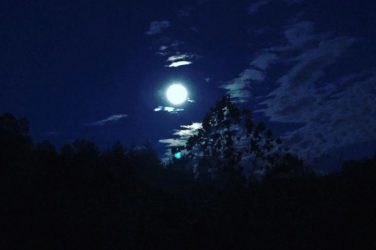 Information we find in books or online is not definitive. We must learn to ... 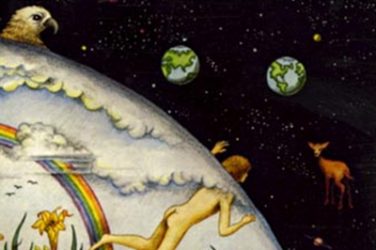 Use this information to craft more effective journeys for yourself. 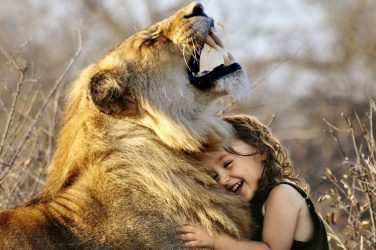 And sometimes it just takes a little bit of fierceness to restore balance when ...

WITCH July 19, 2018
0 Shares
WITCH exists to nourish magic in the world through shadow integration and shamelessness done with an awareness of "as within, so without - as above, so below." To write for us and reach an audience of thousands, please send submissions to assistant editor Karolina Boldt at badwitcheseditor@gmail.com.