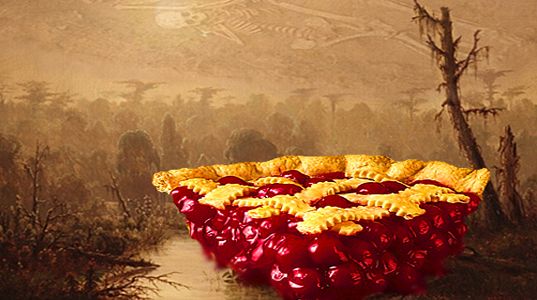 by Charles Webb
In two recent articles, Delta Hoodoo I Ching Casting and Revenge of the Chigger Witch, I have described the establishment of a little known Chinese community in the Mississippi Delta following the Civil War, in general, and some of the doings of a half Chinese, half African American conjure woman known as the Chigger Witch, who died in 2004, in particular.

These stories were told to me by a Chinese cab driver/Berkeley student, with an improbable Mississippi accent, whom I met many years ago. The Chigger Witch was his mother.

I was fascinated by the tale, and as I got to know the cab driver better over the years, he opened up more and more about his mother’s strange and secretive life and profession.

It is with his permission that I continue her story and the history of what came to be called “The Chigger Witch Cooking Club”.

The cab driver asked that I use the name Zhen…”greatly astonished” in Chinese…to refer to him in print, rather than his real name, to preserve his privacy. The accounts that follow are based on the recollections of “greatly astonished”.

Growing up in West Tennessee, I had been aware of the popularity of “hot tamales” in the South, but Zhen reminded me of what is known at the “tamale trail” in the Mississippi Delta, where fresh steaming tamales are sold out of small shacks, directly from vans, and by “tamale ladies” from their homes, primarily in African America communities.

Exactly how this tradition took root in this part of the South remains a mystery, but it is generally hypothesized that migrant workers from Mexico, brought in after the Civil war (like the Chinese), to fill the gap left by the abolition of slavery, brought the taste for tamales with them, along with other folk traditions… 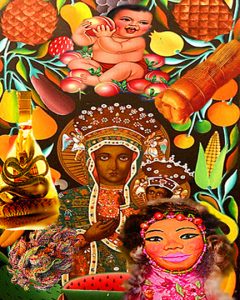 One of Zhen’s earliest memories was of a trip, around Halloween time one year, to an ancient, abandoned graveyard back in the swamps not far from New Orleans, with his mother and his African American root worker grandmother.

Grandmother wanted to introduce her daughter to others in her large, extended family, who were taking part in an ancestor offering, Day of the Dead celebration and feast.

Brightly colored table cloths were spread and covered with a huge variety of dishes…whole barbequed pigs, fried chickens, tubs of rice and beans, and dozens of cherry pies. Zhen found out later on that marijuana and magic mushrooms were ingredients in many of the dishes, particularly the cherry pies.

It seems that the long dead matriarch of the graveyard, a freed slave and legendary conjure woman of great power, had loved this particular kind of cherry pie when alive and seemed to love it even more from the grave.

Blues mixed with zydeco was played and danced to, food was eaten, offerings were made, introductions were exchanged, agreements to meet again the following year were set, then the “congregation” disappeared down the back roads, leaving the carefully arranged dishes of the banquet, many untouched, for the dead to consume at their leisure.

This scene made a lasting impression on Zhen and on his mother. From that point on, food became an important part of her method and resulted in the formation of what she christened the “Chigger Witch Cooking Club”.

As was mentioned in the first article about Zhen’s mother, the back room of the family grocery store was used an “office” and sort of root work apothecary for grandmother’s and then mother’s conjure practice.

When Zhen’s mother took over the space, she set up two altars, which combined hoodoo and Chinese tradition, at either end of a weather beaten, but unused, coffin she had gotten from the family of a plantation undertaker.

One of the altars commemorated Hundun, the Chinese embodiment of primal chaos out of which Tao, yin and yang, and the ten thousand things arose.

Hundun is described in early Chinese myths as a faceless, eyeless, fearless, birdlike monstrosity, with four wings and six feet, which feeds incessantly on fish and loves to dance. The Hundun is older than anything that can be thought of and is undying and unborn…the Source.

This altar always contained the offering of a bowl of “hundun (wonton) soup”…the bubbling, boiling soup of primordial chaos. As it begins to cool, dumpling-blobs of matter coalesce. With the evolution of human consciousness and self-reflection, the soup traditionally was adopted as a fitting metaphor for chaos. 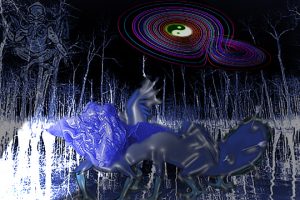 One working, which the Chigger Witch often used in healing conjure, was to have the client cover their head with a hood made of thick black cloth to block the senses (no face like Hundun), lie in the closed coffin, try to imagine their personal “death” (utter silence and darkness) and then emerge “reborn”.

Afterwards, the client would eat a bowl of “hundun” soup to complete the cure. (The lying in coffin-death/rebirth practice has been used for centuries in Chinese and other Asian cultures, shamanic initiations world wide, Christian monastic tradition, etc.).

As we shall see, another, more bizarre version of this practice was also practiced by the Chigger Witch and her group “on location” in an overgrown slave graveyard a few miles away from the family grocery.

The second altar commemorated Xi Wangmu, the Queen Mother of the West in the Chinese pantheon. According to legend, she lives in the Kunlun mountains in the far west, at the border between heaven and earth.

In a cloud-hidden garden, her Peaches of Immortality grow on an immense Tree, ripening once every 3000 years. This World Tree is a cosmic hinge that connects heaven and earth, a portal traveled by spirits and shamans.

She is revered as both a snake and a tiger shaman and is depicted in ancient carvings with “a pair of hares crushing sacred herbs and long-stalked mushrooms (magic mushrooms), while the toad of the moon plays with the raven of the sun.”

Throughout history, Xi Wangmu has been held in especially high esteem by Chinese women who do not go along with the cultural characterization of the submissive woman. To these women, the Queen Mother of the West is seen as a powerful, independent goddess, representing the ultimate yin governing immortality and the afterlife…and the source of yin chi sorcery.

Xi Wangmu’s altar always contained offerings of peaches, mushrooms, rare herbs, the Chigger Witch’s water moccasin wine (similar to the cobra wine popular in China) as well as the elaborate dishes concocted by the growing group of female root workers and aspirants who gathered in the back room of the grocery every week or so to cook and trade stories.

One of the members of this group was a white woman whose husband had died and left her a large farm a few miles from the store. In the woods at the back of this farm was the overgrown slave graveyard mentioned above.

According to stories told by the county elders, this graveyard was often used by long dead blues men to practice guitar, harmonica and singing and the sounds of these sessions can still be heard coming from the graveyard on moonlit nights to this day.

This graveyard contained many sunken and one open grave, which seemingly had never held a coffin. Magic mushrooms also grew there in profusion. 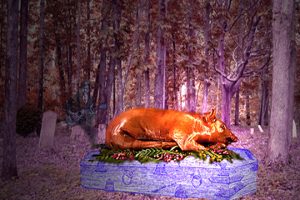 Every so often the Chigger Witch Cooking Club would prepare a formidable, mushroom and herb seasoned banquet at the white woman’s house and take it, along with jugs of rum, to the graveyard to feast upon and as an offering to the blues men and other ancestors residing there.

On these occasions, the open grave would be used to perform a version of the coffin ritual described above.

The person being “buried” during this mock funeral would be dealt the “Dead Man’s Hand” (aces and eights) and given their “winnings”…several Chinese “I Ching” coins (containing baqua trigrams), which would be thrown into the grave as they lay there, shrouded in thick black blankets.

Following the “rebirth” the cards would each be cut into four parts, and with two of the coins, bound together with black thread, dipped in orange shellac and left to dry. The resulting amulet was then worn as a reminder of the continuing power of the ritual. 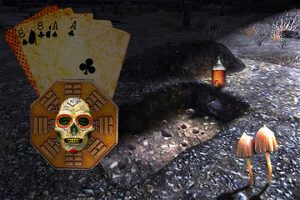 If any member of the group had been recently crossed, cursed or otherwise harmed by someone, they could call for a working known as “having the person’s name for dinner” during these banquets in the graveyard.

The group would then take all of the leftover food and other garbage generated by that night’s feast and assemble a life sized effigy of the offending person at the bottom of the open grave.

The person’s name would be written on a makeshift wooden grave marker, and the soon to be rotting “corpse” would be left to the ants, worms, rats and other creatures of the night.

By the time the next banquet in the graveyard was convened, all traces of the effigy, as well as the grave marker containing the offender’s name, would have disappeared and the open grave would appear to have been “prepared” for its next occupant by some unseen ground keepers.

“The maggots and termites are friends of mine”, the Chigger Witch would often say, when asked about who was cleaning up “that mess” from the last working. 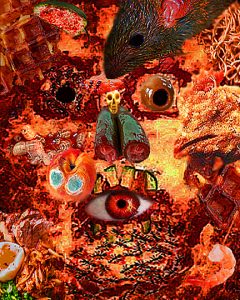 Zhen secretly watched many of these ceremonies from the edge of the woods surrounding the graveyard.

Many times during his teen years, he would bring a guitar with him and play along with the ghostly strumming that could usually be heard after the Chigger Witch Cooking Club’s laughter grew fainter and fainter as the women made their way back through the woods to the white woman’s house. 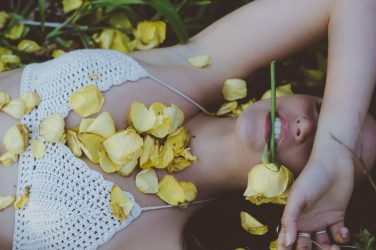 Are You A Spring Witch Or An Autumn Witch?

Both - the excited, passionate energy of the Witch of Spring and the deep, ... 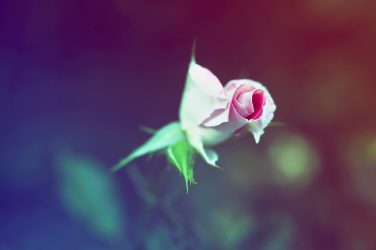 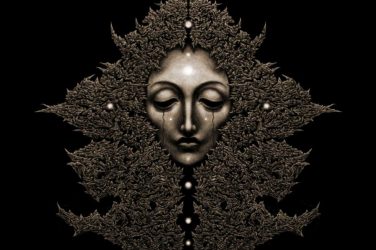 Witchcraft. The Borderlands Of Faith And Doubt

Doubt is the status quo. Faith is the muscle you build.

WITCH November 26, 2018
0 Shares
WITCH exists to nourish magic in the world through shadow integration and shamelessness done with an awareness of "as within, so without - as above, so below." To write for us and reach an audience of thousands, please send submissions to assistant editor Karolina Boldt at badwitcheseditor@gmail.com.