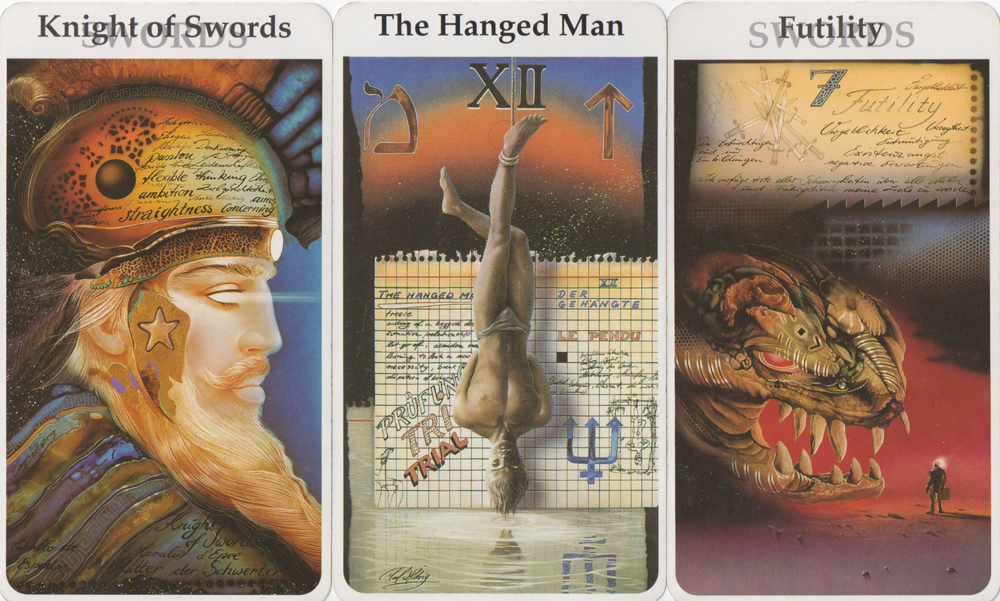 The first thing that I noticed after drawing today’s cards were the colours — and how they can unite, and separate.

It’s probably worth keeping that in mind, the idea of unity and separation and returning to the idea of it, and how you’re experiencing it, over the course of the week.

These are some powerful cards, working across all aspects of the tarot deck — a Major (The Hanged Man), a Court (Knight of Swords), and a Minor number (Seven of Swords).

So there is an activation that is going on both in the greater scheme of your life, in how you’re being and how you’re called to be, and in the detail of your experience.

First, on the left, you meet the Knight of Swords as an aspect of you that currently is operative, or as someone who is mirroring this aspect to you, or you are conscious of both. It depends on you and your circumstances.

As an individual when well-aspected, he is keenly insightful — creatively so. He is authoritative. He is able to look fearlessly at what is hidden and ready to reveal itself. He speaks what he sees, and his words are active, directed, assertive. His mind is air, his energy is fire.

Back to those colours now, because I see a curious mirroring of the colours in the headdress of the Knight, and in the overarching aurora in The Hanged Man, as if they are linked. Which, of course, they are.

The colours are like an autumnal mother-of-pearl dancing around the Knight.

More than that: he is their origin. Warm, vital, radiating — but then with this beam of bright white light lasering out of his visible eye and into the card in front of him and the suspended figure of the Hanged Man.

That white light is also visible on the circlet on his brow.

This vision is not only physical; it is intuitive. Here is the insight. Here is the ability to cut through the façade and get to the truth — that nugget of light truth at the core of things.

Which is so much in contrast with The Hanged Man, who is the epitome of Neptunian water.

The Hanged Man appears when your old tricks and get-out clauses no longer work.

He is the advent of suspension — that moment where you are held to account for your life, where life speeds past you while you (often infuriatingly) are left to deal with your unfinished business: the business that you have chosen to ignore, what you hoped would go away with the purchase of that new car, that change in location, that new relationship.

In that moment, you realise that any external action is not going to help anymore. Sure, it may add a temporary exciting sheen to things, a short-lived diversion.

But you can’t spritz shit with perfume and call it blossom. You are being asked to look at your shit — to claim your disowned baggage.

To find your unlived life.

The more you resist, the more you have a chance to see through your tricksy avoidance tactics, the more you can laugh at yourself, the closer you get to the truth.

And the Knight of Swords is so beautifully on your side here, shining his light of insight on to what it is that you are being assisted in seeing by being hung upside-down, so that your head contacts with the watery world of the unconscious — Neptune.

The ocean. The feeling realm.

The Knight meeting The Hanged Man is where air dances with water, flicking the ocean up into foamy peaks that form distinct, identifiable ripples on the surface: moments of recognition and a contact point where you can see the division between the upper world of air, and the depths beneath.

The Hanged Man lies just over halfway through the Major Arcana. He is the gateway to the second half of life; an initiation. Initiations are designed to test you, rites of passage as they are between one state and another.

You only get The Hanged Man when you are ready. Not feeling like you’re ready? If that suspended figure at centre feels all-too-familiar to you, or if it feels like it is calling you to a new stage in your adventure, then, yes, you are ready.

The Hanged Man is not easy, but then no initiation worth something is easy.

But here’s the thing:

When The Hanged Man appears, more often than not it isn’t the experience depicted on the card that creates the difficulty, but your resistance to surrendering to it.

To put it in a psychotherapeutic nutshell:

In the first half of life, as we emerge from adolescence and into early adulthood, our primary focus is to find our place in the world. We are externally orientated, we need to make a name for ourselves, we need to know we are accepted. We go out to show we can make it with the best of them.

And then things start to fall apart.

We begin to realise that all of those things that felt so important in our outer lives don’t seem so important anymore. Things that seemed shiny and bright lose their lustre, old behaviours and pastimes don’t work so well.

What was meaningful now seems empty, like so much cotton candy.

We try to fill ourselves with more, and not only does it not fill us anymore — it starts to feel repellent.

Then, in some way, our unconscious co-creates the circumstances so that we meet with a roadblock. Not only has that same old road that we’ve always taken become boring to us: now, we can no longer choose to go down it at all. It has become forever closed off. We may get depressed, we may mourn.

But what we are being called to do is to surrender to the rope around our ankles, to be lifted off the once-familiar ground, and turned upside-down so that we can see things from a whole new perspective.

Things look a little surreal upside-down, no? Maybe even a little ridiculous?

From this new angle, we can start to see the cogs turning in our lives — those clunky, clockwork actions and going-through-the-motions that we couldn’t see when we were up and running and right in the thick of things.

Unsettling, much? Maybe much needs to be unsettled.

The Knight is the ability to discern and articulate what evolves from your time of suspension. In his fullest expression, he sees what matters, and what does not. And he can act on that understanding.

The alternative to all of this? That’s the card on the right, the Seven of Swords. It’s a visual cliché in the context of this reading, but one that serves: a suit, with a briefcase, stared-down and cowed by what has become grotesque. The beast is not interested in you as an individual; it is interested that you toe the line and conform, no questions asked.

And that may well be simply your old life, the shadow of what once was vital, insisting that you continue to listen and conform to it.

Look at the Seven of Swords, then go back and look at The Hanged Man and the Knight of Swords, with their complementary colours.

The only way out, however, is through, and the Knight knows this.

His authority is your assumption of authority over your own existence, and your ability to find out what matters, and what does not. And that is one of the most important initiations of all.

Astrology Correspondences: Knight of Swords (the fiery aspect of air), The Hanged Man (Neptune), Seven of Swords (Moon in Aquarius)

Sex Transmutation: How to Channel Sex Energy to Fascinate, Attract Abundance, and Create Your Reality 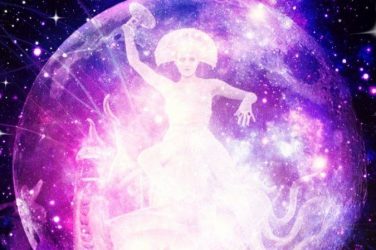 MAY YOU LIVE IN INTERESTING TIMES ~ Full Moon in Sagittarius – June 20th, 2016

As the last Full Moon in Sagittarius set the stage for what you would ... 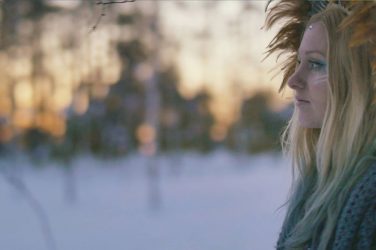 We feel it all - and through these expressions we deal with it and ... 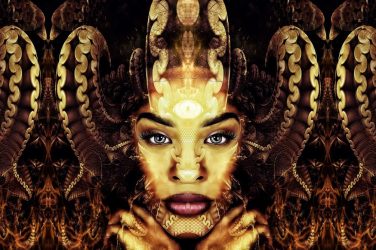 by Renée Damoiselle I grew up in a religion (and maybe you did too!) ...

WITCH January 29, 2019
0 Shares
WITCH exists to nourish magic in the world through shadow integration and shamelessness done with an awareness of "as within, so without - as above, so below." To write for us and reach an audience of thousands, please send submissions to assistant editor Karolina Boldt at badwitcheseditor@gmail.com.