Under the Blood Moon, even a Witch who sparkles with a pink-diamond, she-god aura eleven months out of the year is confronted by her most grotesque shadows and a bone-deep lust for the primal, creaturely dark.

She must admit that she secretly wishes her pearly whites would lengthen to fangs and her tongue would acquire a taste for blood.

On these twixt-and-tween nights when the veil is so thin she can hear the ghosts of her dead lovers calling her by name, her healer’s magick does not satiate her red and raw hunger for deep relationship with holy death.

She stands not at the edge of the void but fully in it, riding the most monstrous incarnation of the feminine shadow and roaming the most haunted graveyard her fertile psyche can concoct.

Here, she craves a safe space wherein the worm-riddled and rotting romance of bodily dissolution can be licked clean of its stigma.

Here, the scent of nature’s death bed turns her on, and, in this wild place, she must gain entry into the feminine dark while she still remembers the secret password and before the brighter moons begin to wax away her night-vision.

1. Take the Grim Reaper to Bed, and Assert the Power of the Dark Feminine Divine

The suppression of death and dying in Western culture is akin to the oppression of the feminine dark.

The womb, be it a physical or energetic space at the sacral chakra’s center, is a portal to life and death, and the uninitiated masculine’s attempts to control that holy gateway have been responsible for much of the ills befallen women and children throughout the global community and over time.

To look death square in the eye while engaged in sexual union is to affirm the perpetual presence of the dark feminine divine. She is still here, and she’s coming for us all.

2. Reclaim the Sex-Death Relationship to Honor our Dead

The act of sexual union exists in the void between death and birth.

The women of our bloodlines were forced to give regular nod to the relationship between sex and death, with many women still confronted by this often neglected connection.

In the absence of reliable birth-control, a choice to have heterosexual sex was a choice to potentially become pregnant.

In the concurrent absence of reproductive healthcare for women, pregnancy easily leads to death via normative pregnancy complications, an attempt to terminate the pregnancy, or in unmanaged childbirth.

The possibility of death holds hands tightly with sexual union, and, in this wild graveyard of night creatures, we reclaim the so-sensual essence of our body’s impermanence and honor the women of our line as keepers of both life and death.

3. Open Your Legs in Front of Ghostly Voyeurs and Be Wildly Alive

We did not come here to detach our minds from our senses.

Let death hold your left hand while life holds your right then ride that other warm and willing body while the spirits watch, should they care to see your bare-breasted body prayer.

The knowledge of how thin the line is between death and sex keeps you fiercely present. Surrender to sensation, to the swell and gush of ecstasy. Let your lover’s hands remind you why you have come to this wild Earth.

You have been sent here to feel it all and then some.

Your soul designed this short life for you as a container for cyclical growth. Under the Blood Moon, engage in the one act that is at once the ultimate expression of life and the quintessential death ritual.

Die the little death then do it all again while your body is still soft and your heart still beats. Howl to the jewel orange moon and give your lover’s skin a she-wolf’s compassionate clawing.

The heat of your flesh is a memorial candle, and the wet on your thighs is holy water. This is the death ritual of the temporary body and unruined soul.

Your Witch’s psyche craves the dark now more than ever, and to reclaim the death-sex partnership is to reclaim the power of the midnight Creatrix, the Dark She-God Divine, and the wisdom of the hooded shadow self.

Go to the wild place where the stones are faded and the vines have wrapped around the crosses. Go safe and shielded to that hallowed ground and open your heart and your legs to the great death-life-death mystery slowly consuming us all.

Danielle is a long-time activist for wild woman spirituality and the divine feminine’s return. She is the author of the forthcoming book Woman Most Wild: Liberating the Witch Within.  She believes that all women alive today are meant to be instrumental in supporting positive social transformation through wild woman spirituality, reclamation of the name Witch, and the magick of sisterhood. Visit her website for more information.

THE WAND IN THE STONE: Journey of the Witch-Heroine

THE TAROTCAST: Stop Feeding The Beast; Start Feeding Your Soul 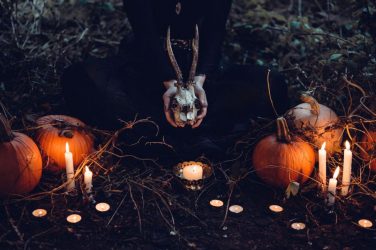 5 HALLOWEEN GATHERINGS FOR WITCHES IN NYC 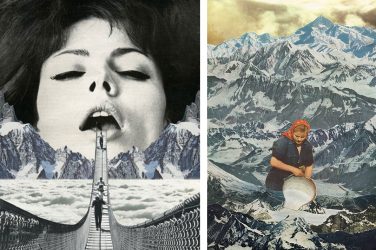 REMEMBER THIS WHEN YOU DOUBT YOUR POWER

A confession that’s a bit painful to say: Even though I run this magazine, ... 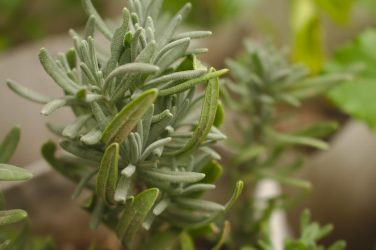 One of the best ways to unlock rosemary’s magic is by smudging.

WITCH December 17, 2018
0 Shares
WITCH exists to nourish magic in the world through shadow integration and shamelessness done with an awareness of "as within, so without - as above, so below." To write for us and reach an audience of thousands, please send submissions to assistant editor Karolina Boldt at badwitcheseditor@gmail.com.