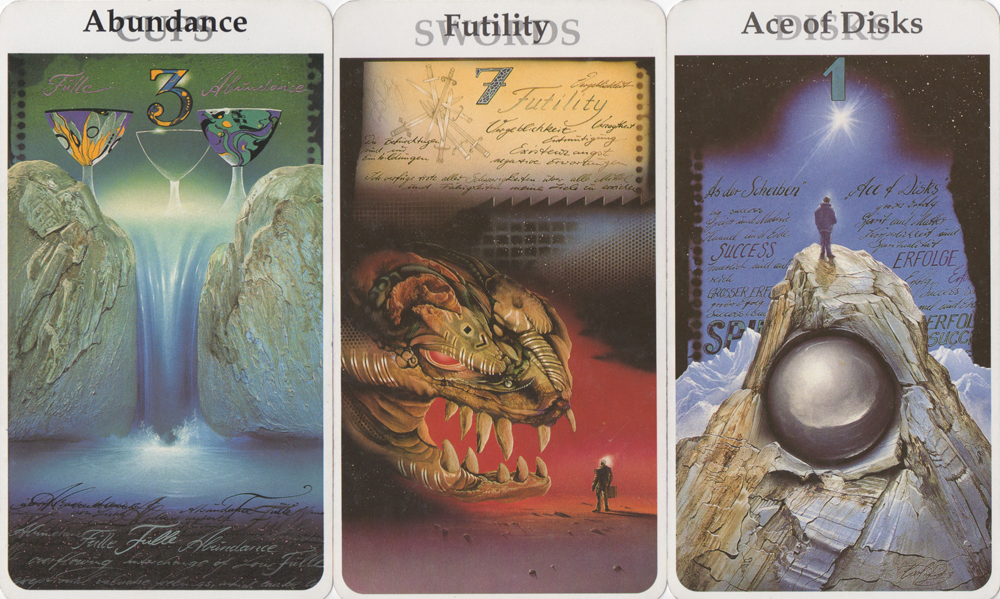 So. Do you still feel that sense of futility nipping at your heels in the form of the Seven of Swords at centre? Stretching its neck out towards you and breathing its turgid, heartless breath of despondency and defeat so that you feel it push you backwards, as if your progress is being resisted, your path blocked?

And it’s significant, the power it holds. It’s impressive enough to be impacting not only your thoughts, but your beliefs too, which lie deeper than thought and are harder to get to or to reason with.

Remember where the Seven of Swords appeared last week, to the right of The Hanged Man? It represented everything you were getting to contemplate while you were held in suspension.

There, upside down, where you were more receptive to noticing what was out of consciousness before, you could see the Seven of Swords in action from an angle that let you into the workings behind it.

For a moment, perhaps, you could see it for what it was: a compelling voice that told you to conform, and to turn away from the freedom you were contemplating.

Freedom from obsolete obligation, from allegiances to causes that no longer nourished you, which wanted only your time and your energy.

The kicker about the Seven of Swords is the realisation that there is no outside entity needed to enforce this obligation; you’re doing most of the leg-work yourself.

Yes, that voice may manifest in an outer figure — an employer or an organisation, a promise you made, an unwritten agreement or code, an allegiance that lost its lustre and relevance some time ago — but it’s you who took it, internalised it, and ran with it, obedient to its every whim or command, cowed into submission by — what? Fear?

And if so, is it fear of what is to come?

Or is it fear of something that has already happened?

The Sevens are spiritual struggles. They represent a moment of choice on which much hinges. In essence, they are a turning point, or they are a decision to keep going as you’ve always done.

Here, your choice point is how you choose to view your life.

This is enmeshed deeply with how you learned to view it growing up and the circumstances you have unconsciously created that have reinforced your learning — your conditioned thoughts about how life works, what you can expect of it, and the threatened consequences (they don’t even have to be real to be effective) of even questioning that learning, let alone trying to undo it.

I am inviting you to look at that beast in the Seven of Swords and link it to a thought, a repeating experience, a deep-seated understanding that “things just simply work this way.”

You need do nothing more than that. Awareness by itself is a greatly underestimated force. Just awareness — for as long as you can hold it, and that might only be for an instant. It may stay with you; it may disappear. If it seems to slip out of your grasp, then, like that proverbial butterfly, wait for it to come back to you. It will at the right time.

In the meantime, look at what else is present to you in the form of the two cards flanking the Seven of Swords: the Three of Cups to the left, and the Ace of Disks to the right.

The Three of Cups is also called Abundance, and represents the idea of fertility, fecundity, gatherings — and so community.

It is the celebration of the Two of Cups — the idea of love mirrored back to you from someone else — as it expands further out into your world.

The third cup above the waterfall is yet to be filled, but it is there, and waiting. Perhaps it is yours.

The Three of Cups here suggests that alongside Futility there is a place of rich rebirth, nurturing, and a sense of connection rather than separation.

This is what you can reach for — a feeling of belonging that lies beyond thought. It is where your heart can rest, held by others who can give to you in those moments where you are not always able to give to yourself.

This connection is exchange and flow. It is not needy, grasping, or conditional. The flow is not based on being worthy. It is given freely.

It can come from friends, from family (biological or of one’s choosing), or a trusted confidant such as a therapist.

If you question whether you are deserving, you’re not in the land of the Three of Cups, but back in the Seven.

There is enough. You are enough. Whether you believe it (Swords = beliefs) or not.

On the other side of the Seven of Swords is what lies in potential, and that is the Ace of Disks. Aces are non-manifest but available to the extent that you meet them halfway, e.g. ask for them, move towards them in an act of faith, or find them within.

The Ace of Disks is the potential to bring something into physical reality — so anything you can touch, taste, hear, smell, or see.

Generally though, what you have been looking for out there is often closer than you thought. Far closer. In fact, right here, in the bedrock of your experience.

The Ace is a resource you already have — a skill, perhaps, or an asset — or one that you can ask for. Its purpose is to connect you more clearly with a vision that opens your world up, rather than shuts it, and you, down.

When you’re there contending with the beast in the Seven of Swords, things are too close to see; there is too much interference from what is seething from its jaws. When you reconnect with a support system, you also gift yourself with the opportunity to connect with something valuable to you that offers you the kind of return that money alone can neither barter nor buy.

First, though, that awareness of what tells you differently in the central card, what hisses that things will never change, and you will never be enough.

Can you stop buying that story for a moment?

How about looking at it this way: What is it about you that is so valuable to it, or what is it that you have that is so threatening, that it needs to keep you in your place and believing the yarns it is spinning you?

Because maybe if you found you had both, and you used them, your codependent relationship with a belief that you feed with your attention, and that threatens you into compliance, may be dismantled.

Then what might you have to do with your life? Surely not live it?

DOING MAGIC ON OTHER PEOPLE 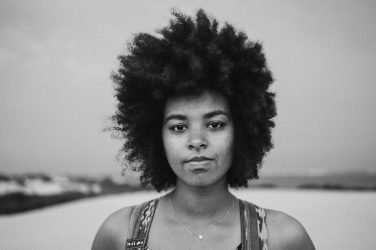 3 Reasons Why No One Can Tell You Your Life Purpose

Only your soul can reveal your purpose to you. And only when you are ... 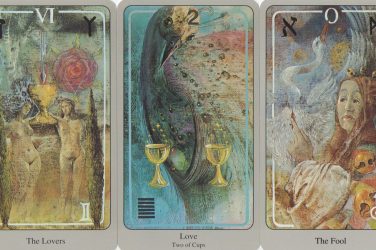 THE TAROTCAST – Your Weekly Tarot Reading for May 9th, 2016

This particular adventure is fuelled by deep passion, intimacy, and also love that has ... 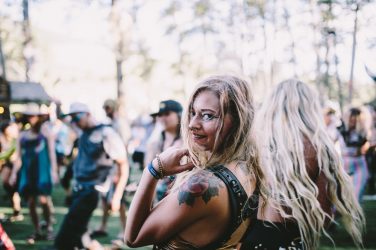 Just because you are a weirdo doesn’t mean that there is no one else ...

WITCH September 10, 2019
3 Shares
WITCH exists to nourish magic in the world through shadow integration and shamelessness done with an awareness of "as within, so without - as above, so below." To write for us and reach an audience of thousands, please send submissions to assistant editor Karolina Boldt at badwitcheseditor@gmail.com.