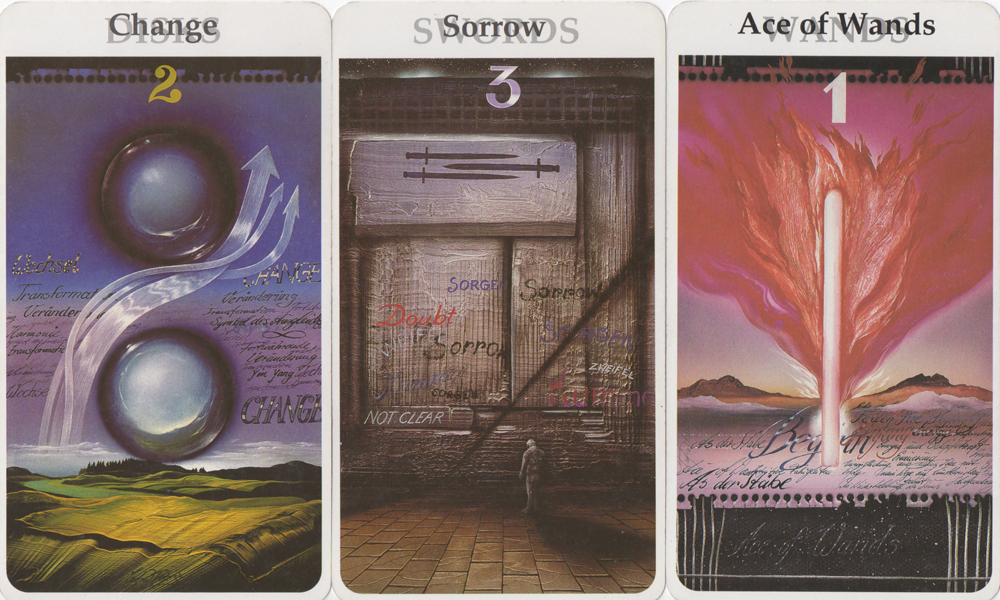 This week, we’re moving away from both the Majors (the larger themes of Soul and meaning — find out more here) and the Courts (different aspects of the personality seeking expression within and outside you) and into the world of Minors.

This means that, for the most part, the reading is interested in the practicalities of life as it is lived out by and through you. For the most part.

Because the final card, which we’ll get to later, is not day-to-day; it isn’t as accessible, nor is it guaranteed.

But it is available to you — both wholly and unconditionally.

More on that as we move through the cards, left to right, starting with the Two of Disks as card number one in the reading.

That’s the foundation you’re working with — the matter that lies underneath and informs what you’re currently negotiating. 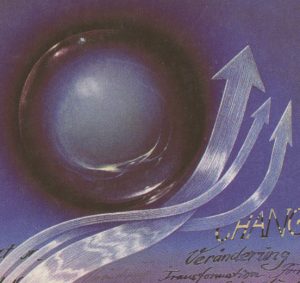 The Two of Disks, as Change in the Minor Arcana, holds the current of the desire to find balance in the physical world.

This is not so much creative, emotional, or intellectual — though each and every one of those aspects will be present because Disks are the last suit in the Minors; they hold the signature of all the suits before it.

Rather, quite recently your creative drive, your emotions, and your thoughts coalesced into something tangible or into a phase where you were being asked to integrate something in a practical way.

It’s early days yet, and you’re still finding your feet. This process may even have been experienced as more literal than you’re used to, or than you are typically comfortable with.

There is a baptism-of-fire quality to the Two of Disks, because it represents the point where theory and preparation have to make way for practice.

Let’s go back to that phrase “juggling act” and use it as a example.

You can read about juggling; you can buy the juggling balls — but no amount of reading or equipment will substitute for the immersive experience of rolling up your sleeves and getting your hands dirty.

Here’s another example: there is that wobble when the child, training wheels finally removed, takes control of the bicycle as the attending adult lets go.

Momentum is the key; rhythm is the key. Stop peddling, or analyse too much, or take those pangs of fear seriously, and that wobble has a propensity to turn into a swift bump back to earth.

Which is fine. This is what practice is.

And the aim of practice has been to be able to simultaneously keep things in motion while dealing with the constant of inconstancy.

So that is the background to your story — the story you’re dealing with right now.

The story that finds you standing in front of the door of the Three of Swords. 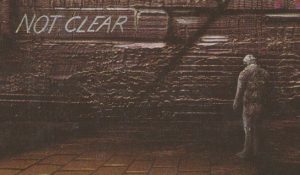 Where Disks are the physical world, Swords are the mind. And here, your mind is under some pressure — pressure enough that you can feel isolated from your vitality and purpose — from your light.

There is sorrow — as is stated clearly on the card in several places — because there is a perceived sacrifice: in order to restore balance, it looks like one sword needs to be removed.

In this case, sorrow may be the mourning of the loss of simplicity, an unwelcome complication, a third option that, instead of creating clarity, takes up apparently equal residence with the status quo.

If you are finding yourself saying, “Why do things have to be so fucking complicated!” or “I long for the time when life was more simple,” or “It’s not FAIR! Everything was FINE when it was just about me!” — well, then: welcome to the Three of Swords.

Your mind is pulling one way, reality another.

And the feeling this creates is only amplified next to the Two of Disks.

“Bloody hell! I only just got started with this — and now look at what’s happening!”

But the tarot holds a key for every door that appears barred to you, and in this reading it is found in the final card — the one card that is not of this world — the Ace of Wands, the non-incarnate, limitless potential of fire. 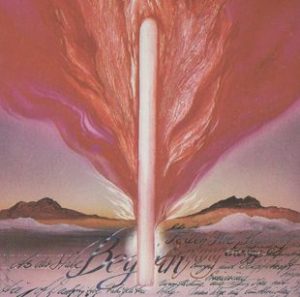 This is what the Ace of Wands is saying to you:

You need to take a step back (or, strictly speaking, two: from Three to Ace).

That doesn’t necessarily mean starting again on a practical level, though it may well mean approaching what you’re facing from a new angle, with a different attitude, and a curiosity about what possibilities exist when you’re not so hell-bent on believing everything you tell yourself.

Easier said than done, though, no?

The mind, after all, is one of the most powerful and convincing, sometimes tricksiest, resources we have at our disposal.

The Three of Swords is a deeply existential form of mourning of what was, and what could have been.

But it’s only a beginning. It is a Three. It is the wobble that comes after you strike out alone on the two wheels of that bicycle.

It is the longing for stability again.

It is also your greatest gift if you can see it for what it is, and then move past it.

Can you believe in the invisible fire when the only proof of its presence is perhaps the low hum of a promise coursing through you?

Can you believe in the invisible fire if that hum isn’t there?

Are you prepared to reach out and ask for it, and see what comes to you?

Are you prepared to feel deeply into the disconnect, or complexity, or sorrow that is so very present in you, and find what lies behind it?

Something is seeking expression, but it demands action on your part — even if that action is just a willingness to look at what’s blocking you and entertain the possibility that it is concealing something else.

This is NOT about false hope. False hope is a thought.

With the Ace of Wands, we are no longer in the land of thoughts.

We are in the land of fire — the least tangible, least accessible suit, but you know it when it starts enlivening through you.

Butterflies in your belly; anticipation; a dissolving of the edges of your obdurate belief systems that reveals something highly creative.

You may never have encountered it before. You may be inclined to play it down or dismiss it — in which case it will listen to you and cease to bother you.

But through your sorrow you can initiate yourself, and begin again in something that at the very least may simply feel better or more right — or could be the kind of change that you’ve been preparing yourself for for some time now.

If you want to grow, do it now. There is no good time; there is no better time.

Astrology Correspondences: Two of Disks (Jupiter in Capricorn), Three of Swords (Saturn in Libra), Ace of Wands (the pure, limitless potential of fire)

[Cards: Two of Disks, Three of Swords, Ace of Wands from The Röhrig Tarot deck, created by Carl-W. Röhrig © US Games, Inc.] 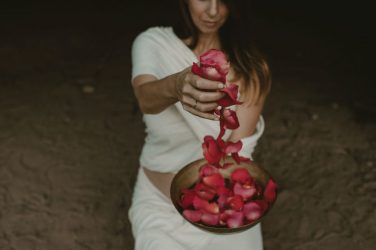 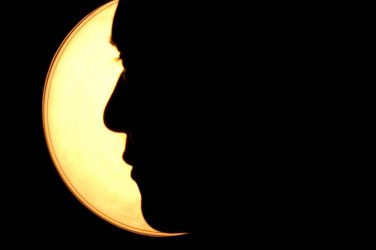 The Condition of the Moon in Electional Astrology

You might be surprised just how much ventures and endeavors succeed even when only ... 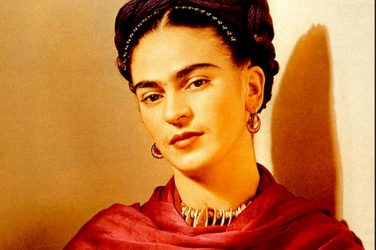 5 TRANSFORMATIVE TEACHINGS ABOUT YOUR CREATIVE GENIUS

We can think, play, and act creatively. We can live our lives in a ...

WITCH April 16, 2016
0 comments 0 Shares
WITCH exists to nourish magic in the world through shadow integration and shamelessness done with an awareness of "as within, so without - as above, so below." To write for us and reach an audience of thousands, please send submissions to assistant editor Karolina Boldt at badwitcheseditor@gmail.com.