I have a confession to make: I’m addicted to shadow work.

A witch since barely into my teens, I’ve always been attracted to demons, dark energy and the darkness.

As someone who’s been through hell, I’ve found that claiming my power involves getting to know hell very well.

But it took me a long time to get the hang of shadow work.

When I first got into witchcraft, I had a very ableist, gangbusters approach to it. I was scared and ashamed of my failures and weaknesses.

I thought I could barrel my way into prosperity and happiness with willpower, determination and a PMA (positive mental attitude). I had zero respect for the darkness, and saw it simply as a curse to be overcome.

I’ve since changed my attitude. I now see my darkness, my moods, my violence, pettiness and rage, as tools with valuable potential.

I see my most shameful longings and deepest fears as monsters hiding valuable truths that I need to make my peace with.

When confronting my shadow, instead of repressing my feelings and running away, I sprint towards the darkness, sword in hand, with one question in mind:

What can I learn from this?

One area in which shadow work has revolutionized my life is my sexuality.

I struggled for years with acute loneliness as the result of a compulsive need to date only hot guys.

Growing up as an ugly girl around a bevy of beauties, I wrestled with my sexuality like a hurricane wrestling with verdant new trees.

I writhed and thrashed so violently that I forgot what pleasure even was.

The problem was the culture. In my city (New York), it’s been common for decades to be viciously judgmental of our own and other people’s looks, both in private and openly.

The cruelty lodged itself deep inside my soul.

With it sat rage, despair and a burning shame about my inability to defend myself against other people’s cruelty and cold indifference to me.

Alone, unloved, and scorned, I saw no future for myself in playing the game of life by my rules and continuing to live in an authentic way.

So I immersed myself in other people’s rules.

I shaved my legs and cuddled with my first boy at age 9. I wore eyeliner, read Seventeen and Savage Love compulsively, and wore a slinky backless blue dress to my freshman year dance, chubby back and arms bathed in acne.

As I grew older, I rarely went out without wearing foundation. I insisted on dating only the very hottest guys and ignored all others, resulting in perpetual singlehood.

I wandered around in a cloud of bliss, flying high on other people’s compliments.

And, of course, I was miserable.

I didn’t start to understand my misery until I did a heap of shadow work.

After years of meditation, fasting, and writing, I grew intimately familiar with the oily, slimy mass of my own competitiveness.

Spiteful, vindictive and sour, it fed upon me like an insatiable beast, investing every passing hour with a gnawing fear of not being good enough, of not being able to ensure my health and happiness.

It wasn’t until I hit rock-bottom that I understood how my own unconscious mind had mutated into rabid storm clouds that consumed me and left me immobile.

While, in my conscious mind, I lusted after hot guys and craved acceptance, admiration and success, my life was savaged by the everyday cruelties that came from people’s pursuit of these things.

I complained about other people’s materialism and shallowness, but I had the same values. This created a tension in my soul.

In my heart of hearts, I didn’t want a hot boyfriend, or a woo-woo job, or VIP status at Marquee.

In fact, I loathed those things, because they were so alien to who I actually am: a wounded and conventionally unattractive woman.

Even though I was attracted to the pleasure associated with hot guys and wealth,

spiritually I inhabited a much richer, darker and more fertile place.

I knew what it was like to be ugly, unsuccessful and alone.

That empathy placed me in vibrational opposition to the energy of being good-looking, successful and popular. And it kept me trapped in the empathic experience of all kinds of poverty, even though I craved the pleasure of wealth.

No matter how much our flesh may crave hot sex, good times and expensive food, our efforts will be sabotaged by our need to gravitate towards the depth, severity and sanctity of poverty.

True wealth cannot be achieved, nor happiness found, until we mine meaning and sacredness from the crevice of suffering. “Blessed are those who mourn, for they shall be comforted.”

I couldn’t move forward until I stopped running from my immorality, faced my hypocrisy, and made the conscious choice to act in ways that aligned with my values.

I couldn’t stop being wildly attracted to “hot” guys.

But I could remember times I was intensely attracted to men who weren’t, and admit that there were points in my life where men didn’t have to be hot to catch my attention romantically.

In fact, my hottest romances have combined the soulfulness of somewhat homely men with the heady intoxication of true sexual chemistry.

I could admit that there was a time when I approached fashion, connection and sexuality differently.

When I was younger, I was focused more on expressing myself creatively and spiritually, on exploring ideas and cultures and systems of thought. I wore maxi skirts instead of skinny jeans, did yoga instead of Pilates, read the Bhagavad-Gita instead of romance novels.

I stayed inspired by feeding my soul, not forcing myself into a lifestyle and identity that didn’t fit.

Instead of getting high off of the heat of lust, I sought a subtler and more lasting satisfaction.

It wasn’t as much fun, nor as electrifying a turn-on, but in terms of a happy long-term relationship, it had endlessly better potential.

In addition, it was more in alignment with the actual energy of my sexuality, which was deeply rooted in the experience of ugliness.

At the end of the day, true happiness in love is founded on two people’s ability to communicate with each other, and the sex is a lot better for me with someone who has lived the experience of ugliness.

And I have allowed this transformative shadow work around my sexuality to inform a lot of other areas in my life.

Instead of aspiring to hundreds of thousands of dollars in income and a house on the beach in Beverly Hills, I have attuned myself to what would actually make me happy.

I don’t need wealth or status, but I do need strong relationships, a peaceful environment, and a powerful sense of purpose.

By honoring the real hungers behind my insecurities, I’ve been able to find satisfaction.

Aphrodite Sekhmet is an activist, writer, lay Buddhist nun and initiated Kemetic shaman-priestess living in the Bronx, New York. Her fields of specialty are disability rights, ugly rights, children’s rights, eugenics, gender and sexuality, mixed race studies, mental health, and bullying. She provides spiritual counseling and divination to a wide array of clients. Aphrodite blogs at Priestess in Shades of Grey and is working on a book about fasting. Catch her on Facebook and on Twitter, or contact her via thewritestuff1201@gmail.com.

FAKE MAGIC AND WHY WE DO IT 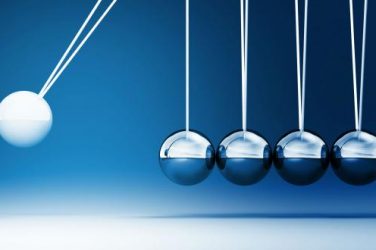 By Ken Blackman From Materialist to Magician The world runs like a wind-up clock. ... 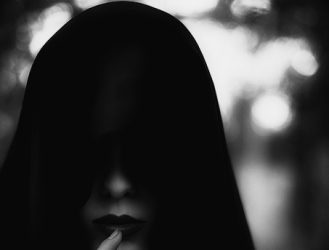 by Allen Michael Hart What will it take to make our dreams come true? ... 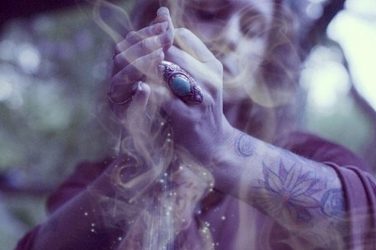 WITCH April 21, 2017
0 comments 0 Shares
WITCH exists to nourish magic in the world through shadow integration and shamelessness done with an awareness of "as within, so without - as above, so below." To write for us and reach an audience of thousands, please send submissions to assistant editor Karolina Boldt at badwitcheseditor@gmail.com.